Reports in GOMsmart and GOM3

Both GOMsmart and GOM3 provide instant access to reports on tens of thousands of fields, wells, pipelines and other features in a map by clicking on it with the Hotlink Tool (the red lightning bolt) and choosing the exact report you need.

Location of Hotlink button in GOM3 (left) and GOMsmart (right).

In GOMsmart, the same sets of reports are also accessible under each of the tabs (Leases, Fields, Wells, etc.) by using the Feature Reports/Charts/Logs button at the bottom of the screen. Two sets of reports are available on most feature classes. The first are those generated by ESA from the latest data in our system (updated hourly), and the second are reports pulled from the BOEM server, generated specifically for your query. 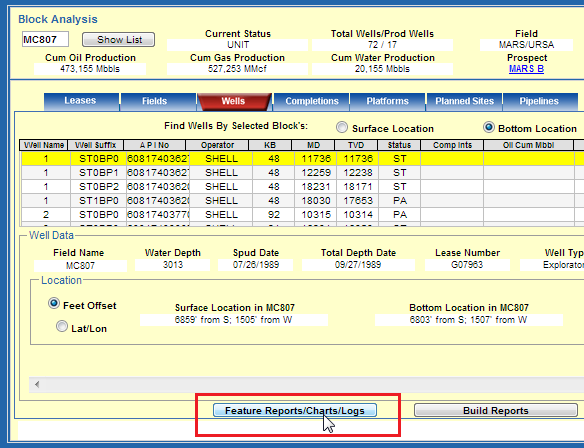 Click the Feature Reports/Charts/Logs to bring up the Report Window. 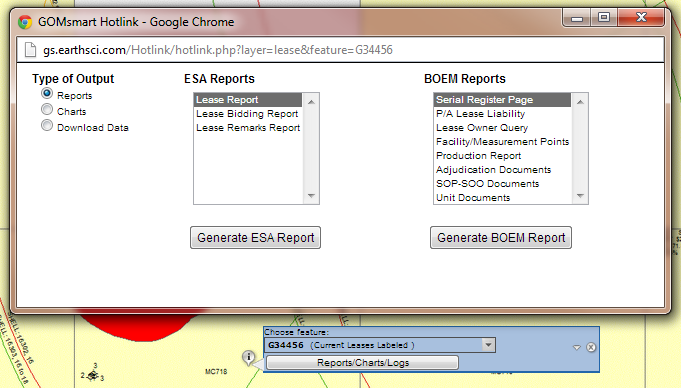 Select an ESA report or a BOEM report.

The ESA reports typically summarize a feature; for example, a Field Summary Report includes location, production, resource and development information. Alternatively, they can be specific to one aspect of the feature. Among ESA reports on Leases is a Bidding Report that summarizes all bids on all leases covering a block since 1972; the Lease Remarks Report organizes all the data for a lease from BOEM’s Serial Lease Remarks data.

Pages from an ESA Lease Report.

The BOEM reports you can access on features in GOMsmart and GOM3 are generated indirectly. When you choose a tab in GOMsmart or use the Hot Link on a feature in a GOMsmart or GOM3 map, we capture an identifier for the feature (e.g., a lease number) and build a query for BOEM’s server equivalent to going to their site and navigating to the page with, for instance, “Unit Documents” on a specific lease. Rather than spending 5 minutes on the BOEM site, you can use the Hot Link Tool in our maps or the Feature Reports/Charts/Logs button at the bottom of the page in GOMsmart.